The Life Of A Pigeon

Pigeons are fascinating birds. Contrary to popular belief, pigeons are so intelligent they can actually recognize themselves in the mirror (this is called the “mirror test“).

They also have great navigation skills. Cher Ami, a homing pigeon that served during World War I, saved the lives of 200 soldiers and was awarded the medal of honor for his work.

Today, since pigeons are so at home living the city life, sometimes this necessitates using pigeon removal tactics to reduce safety and hygiene risks from pigeon infestation. In this post, learn more about pigeons and humane pigeon control.

The Lifespan of a Pigeon

Pigeons today can live up to 15 years in the urban wild.

The bird that is called a “pigeon” actually includes more than 300 different species of birds, each of which share two common characteristics: they hail from the order Columbiformes and they are related to the Dodo, a famous bird that is now extinct.

How and When Pigeons Lay Eggs

Pigeons are very loyal mates who traditionally will stay together for life. They are also prolific breeders who have been known to clutch up to eight times per year. However, each clutch typically only includes two eggs. They can breed all year long, which means a local population of pigeons can grow quite quickly in size. 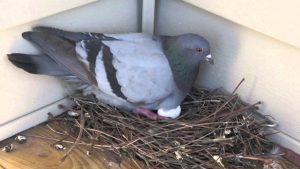 Pigeon nests can be anchored on many Arizona homes.

Hatched chicks are called squabs, and they mature quite fast. At two months they are ready to make their own way in the world. In the interim, their parents feed them crop milk, a rich mixture of nutrients the parents produce from their own bodies. As they grow up, their parents will offer seeds, leaves, berries and insects.

Why Pigeons Live in Flocks

Pigeons are highly social flocking birds. They often cohabitate in flocks that can number in the hundreds of birds. Not surprisingly, where one bird might easily go unnoticed in an urban setting, 20 or 30 birds all flocking together in the same location can produce quite a bit of dander, feces and overall mess.

There are many reasons why pigeons, like many other avian species, prefer to live in flocks, safety being first and foremost among those reasons.

This can make pigeon control a priority for both health and sanitation reasons and safety reasons. Since pigeons have lived side-by-side with homo sapiens for an estimated several thousand years, they are quite acclimated to urban life and think nothing of feeding, mating, nesting and rearing young in close proximity to people.

As such, in some areas so-called pigeon infestation can be a problem that must be addressed. Luckily, pigeon removal techniques today include safe, humane and attractive options that harm neither humans nor birds.

Call The Pigeon Guy now for all your humane pigeon control and pigeon removal needs.